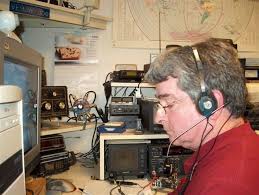 Contesting is a competitive activity pursued by amateur radio operators. In a contest, an amateur radio station, which may be operated by an individual or a team, seeks to contact as many other amateur radio stations as possible in a given period of time and exchange information. Rules for each competition define the amateur radio bands, the mode of communication that may be used, and the kind of information that must be exchanged. The contacts made during the contest contribute to a score by which stations are ranked. Contest sponsors publish the results in magazines and on web sites.

Contesting grew out of other amateur radio activities in the 1920s and 1930s. As intercontinental communications with amateur radio became more common, competitions were formed to challenge stations to make as many contacts as possible with amateur radio stations in other countries. Contests were also formed to provide opportunities for amateur radio operators to practice their message handling skills, used for routine or emergency communications across long distances. Over time, the number and variety of radio contests has increased, and many amateur radio operators today pursue the sport as their primary amateur radio activity.
There is no international authority or governance organization for this sport. Each competition is sponsored separately and has its own set of rules. Contest rules do not necessarily require entrants to comply with voluntary international band plans. Participants must, however, adhere to the amateur radio regulations of the country in which they are located. Because radio contests take place using amateur radio, competitors are generally forbidden by their national amateur radio regulations from being compensated financially for their activity. High levels of amateur radio contest activity, and contesters failing to comply with international band plans, can result in friction between contest participants and other amateur radio users of the same radio spectrum.