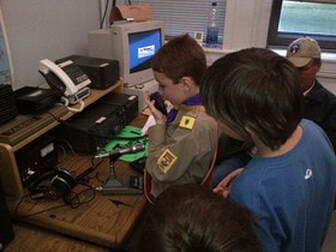 The Loyalist Amateur Radio Club has always supported the Cubs and Scouts in this great event.  It was attended by a good number of amateurs this year (2018) and it was very interesting to see them take part, and talk to the fellow cubs and scouts.  The contacts were mostly in the States due to the propagation at the time.  We had some 2 meter contacts, from around New Brunswick on the linking system, we had two HF Radios, one on 40m and one on 20m.  We all had a lot of fun, and can't wait to do it again.
The Jamboree on the Air, or JOTA, is an annual Scouting event that uses Amateur Radio to link Scouts around the world, around Canada, and in your own community. Held on the third full weekend of October each year, this worldwide jamboree requires no travel, other than to a nearby Amateur radio shack, Scout meeting place, camp or community center.
JOTA started in 1958 (with the World JOTA Bureau located right here in Ottawa, Canada). In 1997, communicating through the Internet was added, and this was called Jamboree on the Internet, or JOTI for short. Both annual events are sanctioned and sponsored by the World Organization of the Scouting Movement.
In short, it’s the best way to talk to half a million Scouts and Guides without having to leave your own community!

Here are some pictures

Please note that we didn't publish any direct close up pictures with children taking part in JOTA at the request of their parents.
The 2019 JOTA
The 2019 JOTA exercise was held on October 19th, it was attended by six members of the LCARC club, VE9TNT, VE9FI, VE9MY, VE9DSO, VE9RS, VE9PTC,  there were plenty of cubs and scouts attending to learn about ham radio.  It was a a beautiful sunny day to set up the new buddy poll antenna working mostly 40 meters, and Len had his fibreglass poll which was used on the 20 meter band.  We had a cw key for the kids to practise there name, there was a 2 meter station  communicating with UNB that was using the IRG system. The Sout leaders keep a good control of things and feed us some Hamburgers and drinks, all told a great day had by all.