Why is it called Ham Radio?
Well, it goes like this: The acronym "HAM" was applied in 1908 and was the station CALL of the first amateur wireless stations operated by some amateurs of the Harvard Radio Club. They were ALBERT S. HYMAN, BOB ALMY and PEGGIE MURRAY. At first they called their station "HYMAN-ALMY-MURRAY". That's it, that's all! 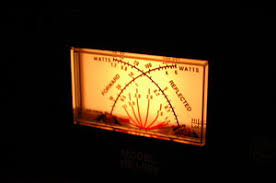 Standing wave ratio
The term “SWR” means standing wave ratio. A “SWR” meter is used to measure how well the transmit power signal emitted from a transceiver (radio) is traveling through the antenna system into the atmosphere. Checking and setting the antenna is critical to overall performance of transceiver (radio). During installation of a Business Band, Ham or Marine radio or installing a new antenna, the SWR must be checked to ensure the transmit power coming from the radio is traveling through the antenna system correctly.
A poor performing antenna system significantly reduces (transmit & receive) range and can damage the transceiver (radio). When the signal does not travel through the antenna system correctly, the transmit power is reflected back into the transceiver which causes reduced range and potential damage to the internal parts.
Some radios include a built-in meter while other compact radios do not. If you do not have one built-in to your radio, you will need to get one so that you can tune your antenna for your application.
Checking and setting the “SWR” on all radio applications is the most important step in obtaining the best performance possible.
When testing and adjusting the antenna, make sure to check “SWR” on the lowest and the highest frequency. By adjusting and setting the “SWR” on the entire bandwidth, it will ensure optimum performance on that band. The radio will receive and transmit well with a good “SWR” reading of 2.5 or less across all channels. The lower the “SWR” reading the better your radio will perform.
Check SWR on AM only, not on SSB. Your other readings will be ok if you have good SWR readings on AM carrier.

SWR 1.0-1.5: The ideal range! If your SWR is under 1.5, you're in great shape. If you're at 1.5 and really, really want to drop down to closer to 1 it's likely possible to do with addition tuning, different equipment or a different mounting location. But the drop from 1.5 to 1.0 won't make a substantial increase in performance. It's not nearly as noticeable as, say, going from 2.0 down to 1.5.

SWR 1.5 - 1.9: There's room for improvement, but SWR in this range should still provide adequate performance. Occasionally, due to installations or vehicle variables, it's impossible to get SWR lower than than this. You should try to get it lower, but performance should still be acceptable in this range. If you've tuned the antenna, SWR in this range is likely an issue of a less-than-ideal mounting location for your vehicle and/or an antenna that isn't ideal for the mounting location.

SWR 2.0 - 2.4: While not good, this likely won't damage your radio with casual use. However, you should definitely try to improve it if you can. SWR in this range is usually caused by a poor antenna mounting location and/or a poor choice of equipment for your specific vehicle. To troubleshoot, you'll likely need to move the mounting location and/or use a more suitable antenna. It's by no means a good tuning job, but will function if you've exhausted all other troubleshooting possibilities.

SWR 3.0+: Performance will be severely affected, and you're likely to damage your radio with extended transmission use. You SHOULD NOT transmit with your radio at SWR levels above 3.0. If your SWR needle swings all the way to the right (off the charts) when getting your 3.0+ readings, you almost certainly have a major installation problem. This is almost always the result of a poor ground or incorrectly assembled stud, but on rare occasions can indicate a faulty coax, antenna, or incorrectly attached SWR meter.

In the amateur radio service, the Amateur Radio Operator Certificate is the authorization. Privileges are dependent on qualifications. Pass marks are 70% except 100% for Morse code.